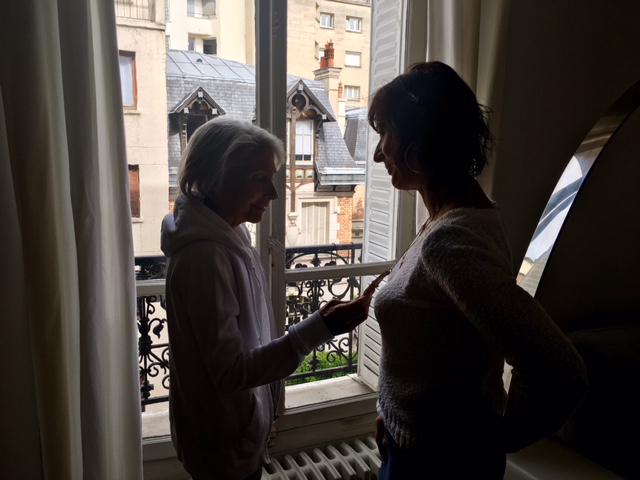 During her 40-year career as a yoga teacher, Aline has trained dozens of yoga teachers including her daughter Sandra Drai. Some, like me, teach outside of France.

Aline Frati has taught me everything in yoga. Her yoga practice, where "listening" and self-awareness are prime, is truly unique.

I’ve come across many yoga teachers since I’ve started practicing yoga. Some have helped me dissolve the tensions that were in the deepest tissues of my body. Some have guided me in the philosophy of yoga. Others have shown me how breathing exercises can expand my awareness. Others have made me feel like I’m dancing. Still, out of all of the teachers who have crossed my path, there is only one whom I consider my true teacher in yoga. Aline Frati has been teaching yoga for 40 of her 79 years--both in classes that she hosts in her classic Parisian-style Haussmannian apartment and also at retreats in France, India and Israel.

A friend dragged me to her class, in 2004. I had never done yoga before. I had been diagnosed with breast cancer shortly before, and was ready to do anything to break from the depression and the fear that came along with the diagnosis.

Aline taught a semi private to my friend and I. The experience with her style of yoga was like love at first sight. I had been pushing myself for decades. I worked in corporate jobs--sometimes in brutally competitive environments--I had no passion for, and I was coming out of a toxic relationship of ten years. I had managed to survive all of this thanks to my inextinguishable joy and the support of my tribe. And here I was, in Aline’s apartment, connecting for the very first time with a part of myself that I had ignored most of my life—my body.

Although Aline says “this yoga approach is for everyone”, the yoga she teaches is the most therapeutic form of yoga I have ever come across. Far from the “yoga-robics” that is widely practiced in the West, her yoga is about developing our capacity to “listen” to our body without judgment. It’s also about dissolving the repetitive patterns of fear and anxiety that we have experienced since childhood, that get fixed in the body in the form of pain or restriction. “The goal is to help a person become aware of this fixed energy so that it can be freed, and find its way back through the body’s global energy,” she explains.

Since 2005, I’ve attended over half a dozen one-week long yoga retreats with Aline. Most of them in an 11th century abbey in the ancient village of Saint Antoine L’Abbaye hidden in the French pre-Alps. The abbey served as a hospital in medieval times, and is now a personal development center run by a Christian community. Every single corner of this place heals.

During Aline’s retreats, I’ve seen her eat almost nothing for a week so that her perception was as clear as it could be for her students. “It’s the teacher’s quality of presence, not the yoga technique, that helps a person harmonize,” she says.

Bringing a person to deep relaxation is pivotal in her yoga teaching. “We can’t modify anything without the body being deeply relaxed first,” she says.

As a little Jewish girl, Aline survived World War II in occupied France. Later, she left an unhappy marriage taking her two kids with her. She met her spiritual teacher, Jean Klein, who passed away in 1998 at the age of 86, when her marriage started falling apart. “Every time I was around him, I felt a sense of unity between us, a thread of love and affection.”

Despite Aline offering me many of Jean Klein’s books, I’ve never understood his writings and philosophy. That’s okay. I don’t need to understand. The most important is that I now feel in my body what is going on with me, and I pass this approach to others through my yoga therapy practice. “Merci”, Aline, for showing me the way to my body and soul.